My Hero Academia is Really About Therapy and German Philosophy

It’s become trendy to dump on My Hero Academia as of late, and I’m just as guilty as anybody. I still love the anime, but there’s no denying there has been a noticeable step down in production values. But you know what? That’s not why you should like My Hero Academia.

Hero Aca has always stood out for the quality of its animation, especially in the best parts of seasons two and three. It has moderately degraded since studio Bones dedicated itself to annual movies and put the same team to work on both the TV anime and films. However, it isn’t like the anime’s voice acting, music, or story has gotten worse too.

But Hero Aca started life as a manga, and that source material continues to go beyond every precedent of quality it has established. I love this story for its character designs, cool powers, and fights, but My Hero was never really about those things. It’s always been about the people in the costumes fighting those battles and using those powers.

My Hero Academia isn’t all spectacular brawls and flashy Quirks, though it has both of those to spare. It’s just as dedicated to peeling back the layers of the human condition as seminal superhero fiction like Watchmen, because My Hero Academia is really all about therapy. And German philosophy, weirdly enough.

This will contain minor spoilers for the manga, starting around Ch 306 and onward. Nothing serious, but be warned if you’re sensitive about things that haven’t been animated.

You might have heard the term ubermensch before. If you haven’t, to grossly oversimplify, the ubermensch is frequently translated as ‘superman’ (small S, not capital), who rises above the conventional morality of society in order to impose their own order.

The term was coined by German philosopher Friedrich Nietzsche, and further popularized in his novel Thus Spoke Zarathustra. The story iterated Nietzsche’s belief that the Christian God could no longer provide ethical values to western civilization. In his eyes, the western world relied too heavily on Judeo-Christian morality, and in an increasingly secular world, the people required a new pillar in order for society to function. If not for that pillar, nihilism would take hold and civilization would break down.

I can’t say as to whether Kohei Horikoshi was inspired by Nietzsche’s philosophy when writing My Hero Academia, but the parallels are obvious. Japan has used All Might, its symbol of peace, as a crutch for decades. By relying on him, they’ve obscured and ignored every crack in their façade of an upright hero society. Heroes are the picture of upright citizens working for the public good, the ideal collectivism that dominates Japanese culture.

But All Might was a man, not a pillar. He passed his power down to Izuku Midoriya and spent the remainder of his Quirk to defeat his ultimate enemy, All For One, who passed on his own legacy to his successor, Tomura Shigaraki. The single pillar supporting hero society has collapsed, and the replacement is a sixteen-year-old kid desperately struggling to be the hero the world needs right now.

It’s not secret that My Hero Academia is heavily inspired by western comics, and that All Might bears more than a passing resemblance to Superman. However, the story is quick to knock the wind out of that particular sail, and reveal that All Might, despite his blustering bravado, is just as weak and vulnerable as any normal person. In fact, his immense strength comes with an equally severe weakness.

If Deku is going to surpass his mentor, he has to learn from the mistakes All Might made. When Toshinori Yagi was a young man, new to his power, the world needed a savior who was willing to bear the humanity’s burdens. However, this alleged messiah has left the world weaker than he found it. Now that he’s unable to fill that role anymore, shouldering those burdens is too much for a world that forget what it was like when their problems were theirs alone.

The first way to correct this is not to be a singular symbol of peace, which Deku has been correcting unwittingly since he began attending UA. His first major breakthrough came in the Sports Festival arc, where he confronts his classmate Todoroki for refusing to use the Quirk he inherited from his abusive father Endeavor, the #2 hero.

Deku inspires his classmates, the next generation of heroes, increasingly as he becomes more confident in his abilities. The next step came at the end of the third season, where he confronts his childhood friend and bully, Bakugo. Deku and Bakugo are forced to reconcile their personal philosophies, prioritizing saving people or winning, respectively. At the end of their fight, they’ve both accepted their places as All Might’s successors.

It’s just that they’re not alone in that.

This is where we dip into spoiler territory, though I promise it’s nothing that could ruin the story, or even that it’s surprising if you’re familiar with My Hero Academia. As the series has grown darker and more serious, Deku has been forced to take on more than he could handle. That’s nothing new; this kid would break every bone in his body if it would help one of his friends avoid a moderate inconvenience.

Deku leaves his friends behind and abandons his meager grasp on his sense of self-preservation. Despite the repeated warnings he’s receive, he throws himself headlong into danger and doesn’t take the time he needs to recoup. It’s understandable, given the circumstances, but it’s unhealthy and unsustainable.

He doesn’t even realize the error of his ways when he’s confronted by his classmates who he’s helped and inspired. Even then, he pushes back hard when they insist he lets them help. As the inheritor of All Might’s power, he’s far beyond what they’re capable of, so the fight ought to be short, but he’s been running himself ragged and taking on all the world’s problems by himself.

My Hero Academia emphasizes the potential of a person when they refuse to give in. It’s right there in UA’s motto, Plus Ultra, go beyond the arbitrary limits that you give yourself. However, you’d be mistaken if you said that My Hero Academia only cares about individual exceptionalism at the expense of the collective.

Going beyond isn’t shining and being exemplary for its own sake, but in the hopes that your actions inspire others to reach their own new heights. Deku isn’t this otherworldly superman who doesn’t have an problems, but he embodied the ideal that you help yourself by helping others. By stretching his hand out to Iida, Todoroki, hell, even Mineta, Deku was putting them in the place they needed to be in order to eventually help him. 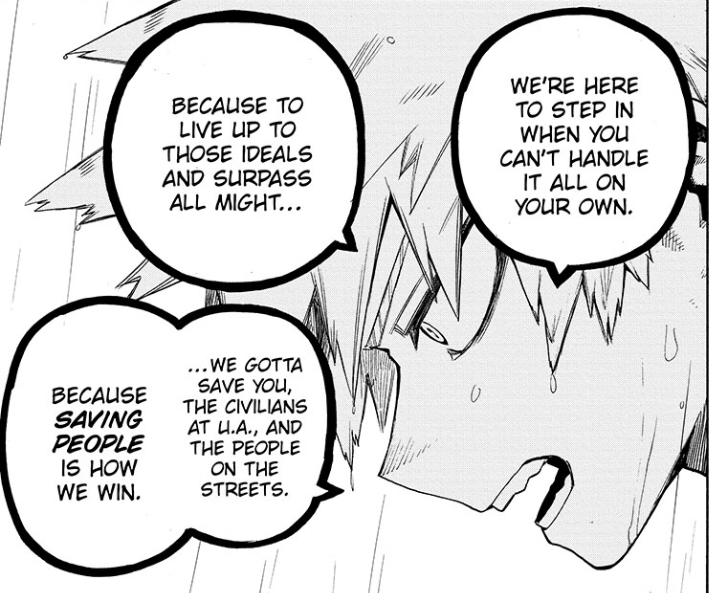 So ultimately, I hope you don’t come away from this thinking that society needs an ubermensch in order to function. The idea is fundamentally flawed, and while I can’t be sure Horikoshi was aware of Nietzsche’s work when writing My Hero Academia, it still stands a testament to those ideas’ invalidity. Putting responsibility for the whole world on one person is simply too much to ask.

But the world doesn’t need one person to rise up and be a savior; it needs dozens, hundreds, thousands, and millions of people to help one another and be helped when they need it. That’s corny, but people have a tendency or seeing a concept that’s simple, true, and kind, and reducing it to the words cheesy or idealistic. My Hero has been cheesy and idealistic from the beginning, and that’s what I love about it.

So maybe I’m full of it, and Horikoshi wanted to write a story about superheroes, and I’m reading way too much into this. It’s possible, but it also doesn’t matter. Take my word for it, writers have a tendency to cram a lot more into their stories than what they wrote on purpose, and the most meaningful interpretations come from that.

So if you’ve been disappointed with the anime lately, or maybe you just want to catch up on this fantastic story as it releases, now is a great time to check out the manga. And if you’re interesting in reading more in-depth analysis on anime, gaming, and manga, check out everything else the Otaku Exhibition has to offer, both on right here and on Twitter @ExhibitionOtaku.