What Makes the Best Harem Anime?

Harem anime don’t enjoy a lofty reputation, or get the same respect as their monogamous peers. That’s a shame, but the stigma isn’t entirely undeserved. You could easily name a dozen harem anime who use their premise merely as an excuse for some cheap lucky perv gags and easy fanservice.

That being said, just because a story or genre is difficult to do right, doesn’t mean that we shouldn’t try. Not every type of writing has the same skill floor, and to make a harem work requires a deft hand. This challenge innate to the genre only further elevates the successful ones.

Harem anime deserve credit for being some of the funniest, smartest, and most sincere stories that anime has to offer. I’d like to take some time today to break down some of my favorites, what makes them work, and what they have in common. We’ve all seen low-brow ecchi anime, but what takes that formula and pushes it a step further?

First, let me establish that you probably like harem anime, even if you think you don’t. A harem consists of a protagonist and three or more love interests; only two and that’s just a love triangle. How many shows do you know that fall under that definition.

My favorite anime, Re:Zero, is a harem anime. Subaru is constantly meeting new girls who have varying degrees of interest in him. Sword Art Online is rife with girls who are vocally aching for Kirito, even while he ignores them to go get trapped in another video game. Evangelion, Food Wars, Bunny Girl Senpai, Toradora, and I can keep going, all have three or more love interests.

You might argue that some of these don’t count as harems, especially in shows like Re:Zero or SAO, since Kirito and Subaru are explicitly only interested in one girl. Sorry, but you read the definition. Harems almost always come down to the main character ending up with one person, so you can’t say a monogamous MC disqualifies a show from being a harem.

I actually prefer shows that have a clear path to the end. There’s fun to be had in genuine competition and stakes, but it’s a lot easier to root for somebody who doesn’t fool around with a bunch of girls and only decides to settle down in episode 12. If you really want to ride the line between those two extremes, though, there are ways to do it. The most important way is connecting our different romantic parties.

While harem anime that focus on women with male love interests exist, for the sake of simplicity, I’ll be referring to these dynamics as male protagonists and female romantic interests. Yes, I know My Next Life as a Villainess Exists, I’m hyped for the Collar X Malice anime, but the majority of harem anime cater specifically to straight men, so let’s proceed with the understanding that I am speaking generally.

Take an anime like The Quintessential Quintuplets. Rather than focus solely on Futaro’s relationship with each of the five girls, the fact is that they’re sisters who care for one another and get on each other’s nerves. The personal conflicts between the Nakano sisters are organic, and both complicate and weave into Futaro’s interactions with each of them.

Or look at a personal favorite of mine, Yamada-kun and the Seven Witches. This high school is plagued by girls with psychic powers, from body swapping to mind control, each activated by a kiss. Our “hero” has to take the bullet and find each of the witches because his ability is copying the powers of whatever witch he kisses. This creates the conflict, as well as a personal tie between the witches, and the unique powers they possess can inform both their personalities and interactions.

Many harem anime don’t really care about giving their female cast any reason to interact. Every girl in Saekano clashes or just dislikes every other girl, but it never really goes anywhere, and it’s reduced to the same three or four gags about Eriri being a jealous tsundere, or Megumi not understanding otaku. The wish fulfillment aspect of harems is that they’re fighting over this one guy; if the girls don’t have reasons to be around each other, then the experience is weakened.

Let’s look at SAO, because it is probably the best-known offender. Kirito has a habit of holding girls in his orbit while only he and Asuna are relevant to the plot. I don’t even know why Lisbeth, Silica, Suguha, and Sinon are there half the time, and I don’t even get the vibe that they like one another. They are all just waiting for Asuna to drop dead so they can fight over Kirito.

But at least we have a strong male supporting cast, he said sarcastically, setting up the next part of the essay about how harems have forgettable male side characters.

Since harem anime usually revolve around the fantasy of one guy and multiple girls, they skimp out on anyone who might threaten the protagonist romantically. If there are other guys in a story, they’re either bumbling, more perverted than the protagonist, or so undesirable no woman would ever want them. I mean, you don’t need more male characters, but if you’re so unwilling to subject your audience-insert protagonist to even the slightest bit of competition, it looks like poor writing.

That’s one of the strengths of High School DxD, where Issei has his regular pervert friends so we can fulfill the quota I just mention, but the demon faction he joins up with includes Yuto, an uber-competent bishonen boy. It’s nothing astonishing, but having an attractive male character who can have a cool fight scene every now and again makes the series much more interesting.

This is where I have to walk back my praise of Yamada-kun, as it wants to have its cake and eat it too. Protag-kun is basically unrivaled romantically for the whole series, and all the witches are way too down with kissing him, but he makes it abundantly clear he’s only interested in one of them. By that point, he’s already been doing some plot-mandatory macking on each girl, so when a witch gets with another guy, it feels like a runner-up consolation prize.

I’m not going to sing Oresuki’s praises excessively, but the series is notable for a few smart ideas in parodying the harem genre. Jouro is a cookie cutter doormat harem protagonist, which is all an elaborate ruse to pick up girls, only for his good looking best friend to pick up all the girls that Jouro had his sights on. When you don’t trick your audience into thinking that your MC is the last man on earth, it opens so many new directions for your story.

Plus, now that they have competition, you’ll actually have to give them a personality and figure out why girls like him and…oh, I get it now.

Tell me what character I’m describing. He’s average height, dark hair, he’s got decent grades, he’s inoffensively nice, but also a little spineless. He’s way more likely to sit down and take a tsundere’s backhand than explain the situation, and he would literally rather die than ask a girl out.

If you guessed the protagonist of about 75% of harem anime, you’re right. You don’t win anything, but thanks for playing. The generic main characters of ecchi anime are almost infuriatingly common, especially since they all managed to get isekai’d while I’m stuck here working a 9 to 5. Just doing the bare minimum to give your MC a defined personality will in turn give the girls a reason to like him, and the whole reason we’re watching your show is for their chemistry.

But the balancing act is important. Their personality has to be developed, but you also have to consider why would multiple girls want to date him. In Saekano, the protagonist is loud, insulting, borderline megalomaniacal, and aggressively stupid, but he’s got four girls willing to jump his bones at any moment. Contrary to what lonely guys on Discord will tell you, women are not magnetically attracted to the biggest jerk in the room.

Remake Our Life comes closer, but not quite. Kyouya is kind, encourages his friends to pursue their passions and helps them in doing that, but he’s too generally nice without much substance behind it. Success lies in threading the needle between the two; I’ll use The Quintessential Quintuplets again. Futaro might be abrasive like Saekano’s Tomoya, but the girls don’t magically fall in love with him; Saekano actually skips the part where any of the girls realize their feelings for him, because it was probably too hard to write.

Futaro is arrogant and rude to the Nakanos, but he isn’t their friend, he’s their tutor. Their relationship is born from his woeful financial state and their dreadful academic state, so they don’t have to like each other at first. It fuels the conflict of the beginning chapters, and gives extra weight to the progress that they make both in their relationships and their studies.

As I will always take a chance to talk about Danmachi, I really like how they handle Bell’s relationships to the women in his life. It’s not because they’re radical or even especially novel; the reason girls like Bell is that he’s sweet and sincere in a world where every other guy is a pompous jerk. No wonder nobody’s interested in Bete, he’s a douchebag!

Bell is genuinely friends with a lot of characters, so not every interaction they have has to be about flirting or building romantic tension. He’s pretty clear about only wanting one girl, but he’s an earnest kid who makes friends easily. I like Danmachi as a harem because it demonstrates that you don’t need anything special to make a harem fun and engaging. 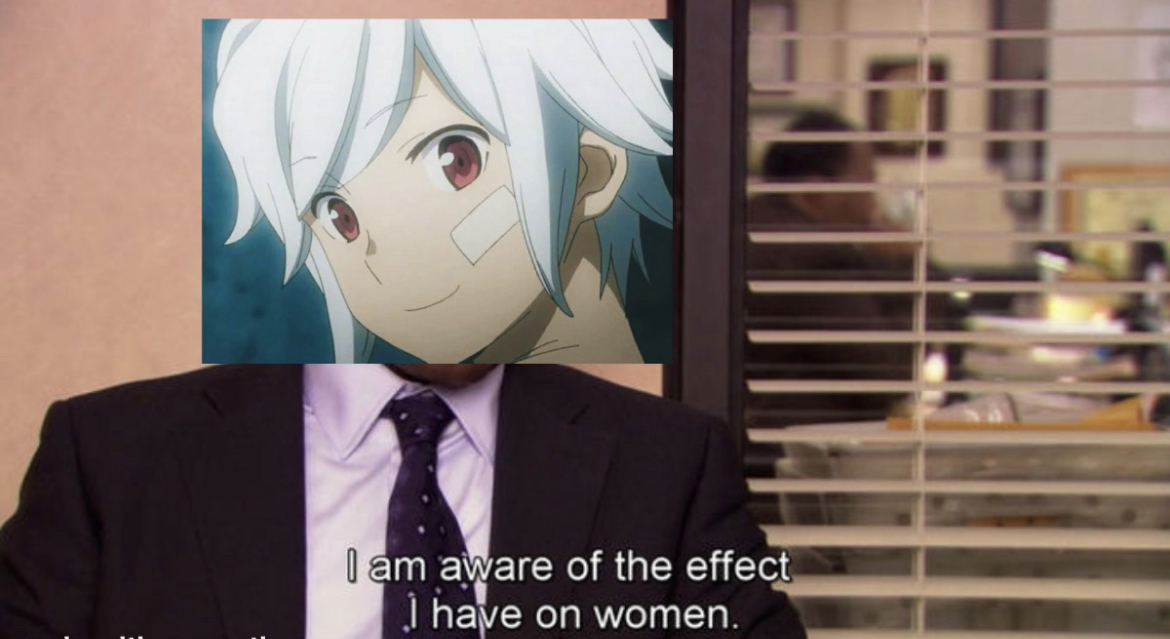 I could go on at length about more harem anime, what they do right, where they fail, but this isn’t a comprehensive list. I just think most harem anime would benefit from better protagonists, strengthening chemistry between characters, and not being afraid to diversify the cast.

But half the reason I don’t plan on listing every single problem is that I like to hear your thoughts in the comments. The other half is that this has already gone on for seven pages, and I have to cut it short before we make it to eight. So, let me know your favorite harem anime, and what makes it so special.

While you’re doing that, you can check out my Twitter @ExhibitionOtaku, where I’m currently raving about my newfound obsession with Blue Lock. Or you can look at one of the anime I reviewed for the summer season, and maybe finding yourself something new to watch. Until next time, thanks for reading.