The Case Study of Vanitas Review: Behind Blue Eyes

Longtime readers will know of my great weakness for the bishonen subgenre, the pretty boys. SK8 The Infinity, Banana Fish, Free, pretty much all projects pertaining to and adjacent with Horoko Utsumi. I make no secret of it, and have in fact come to you today with a new addition to the genre…vampires.

Okay, maybe vampires aren’t exactly fresh in the bishonen anime game, but this one has the added benefit of a plot twist, revealing that the main character is…not a vampire. Okay, I take notes when I’m reviewing a bunch of anime en masse at the start of the season, and they’re less than comprehensible. Trying to decipher these a week later and turn them into something resembling English is starting to take its toll.

Let’s try that from the beginning, shall we? The Case Study of Vanitas is an anime about one pretty vampire boy and one equally pretty human boy with an interest in the field of vampire medicine. They live in a flat together in Paris in the most heterosexual way that two men can live together in a flat in Paris, and are trying to cure the malady turning vampires into bloodsucking fiends. Or…more of bloodsucking fiends than they were before, I guess.

The Case Study of Vanitas is set in a steampunk vision of late 19th century Europe, where vampires exist somewhere between the realm of fairy tales and the reason you don’t go out alone at night. Noe, a young man with a large cat named Murr, is searching for the legendary Book of Vanitas, the grimoire of the infamous blue-eyed vampire. He’s received a tip that it’s been spotted, and we meet him on the airship bound for Paris.

Every vampire is born under the blood red light of a crimson moon, giving them the bright red eyes that appear when they feed. Vanitas was driven out of his clan for being born under the ill omen of a blue moon, and created the grimoire to corrupt the true names of any vampire so unlucky as to open it. Noe’s search for the grimoire is interrupted by a young woman on the ship feeling faint, who suddenly takes a chunk out of his arm.

Surprise, surprise, she’s a vampire, but so is Noe, as he reveals when Vanitas bursts through the airship window. He claims to have been searching for the girl, and after a brief scuffle, he informs Noe of his true intentions, to the the grimoire to cure her of that aforementioned corruption of her true name. A vampire’s life force can be insidiously attacked and infested by a nefarious magic user, but the Book of Vanitas contains the key to purifying their name.

Vanitas’ success is punctuated by the arrival of the police, rather miffed about the guy who broke a window and assaulted their passengers. One short trip out a long way down later, and Vanitas tells Noe that he’s not the real Vanitas, merely a successor to the name and book of the blue moon vampire. More importantly, he’s searching for vampires whose true names have been corrupted, and to halt the extinction of vampires. After a bit of disagreement, Noe joins him 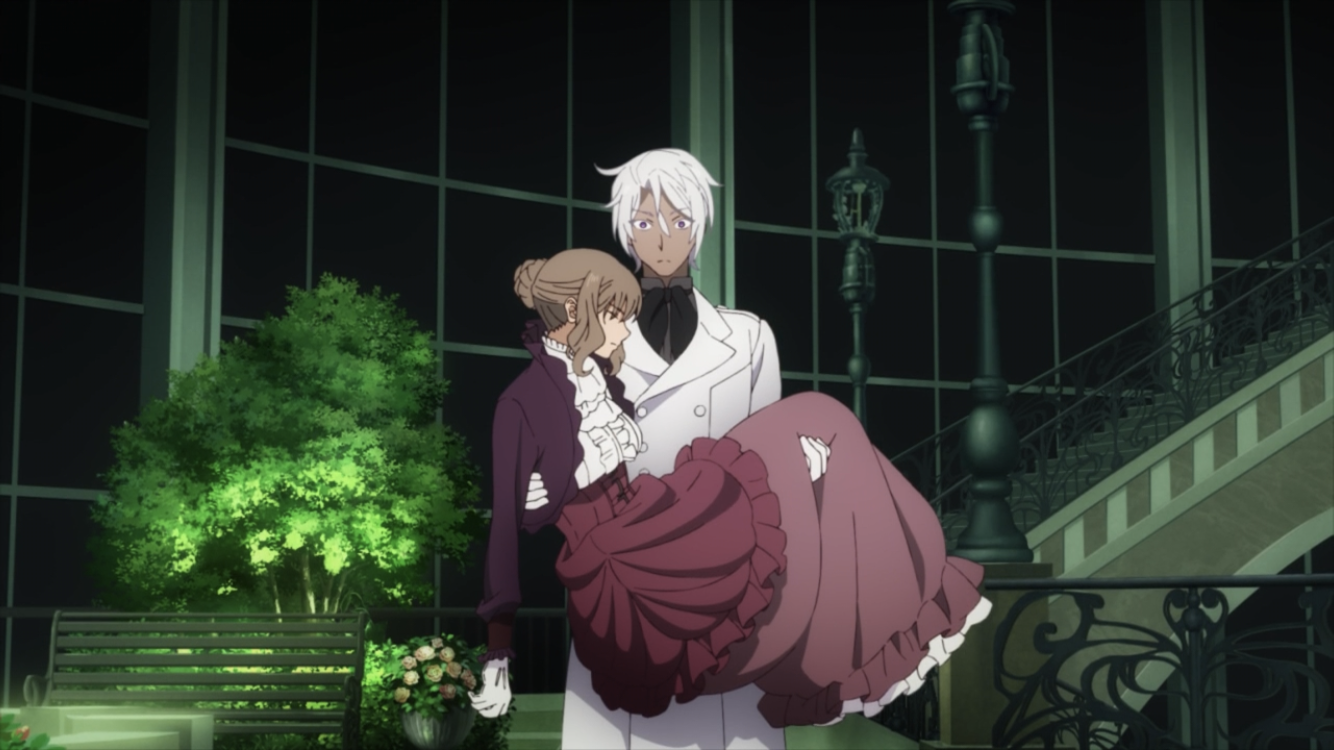 As you might be able to tell from the words ‘bishonen’ and ‘studio Bones’, Vanitas is a slick piece of animation. There’s only a brief fight in the first episode, first between Noe and Vanitas, then Vanitas and the possessed vampire, but it is exceedingly pleasant to look at. The character designs in the main cast are excellent, and the entire project is saturated with a brilliant color palette. There’s some stunning and detailed background art going on here, but hey, that’s par for the course with Bones.

I do love some good steampunk, and nothing hits quite like the streets of Paris bathed in the soft yellow glow of gaslight. We barely get to see it at first, but the airship in the first episode is exactly the sort of gaudy brass monstrosity that makes me love this genre. And considering the flamboyant phantom thief aesthetic Vanitas goes for, it blends into a strange yet cohesive art style.

The opening is an upbeat affair that seems to clash with the dark horror dressing, but you immediately realize this story is not quite so grim as it puts on. The opening complements the sharp humor you get in generous doses when Vanitas and Noe are either bickering or getting along. The ending, to contrast, is much more somber, but no less aesthetically minded, perhaps further playing into the expectations of a spooky period anime.

The art direction is particularly promising, as someone who tracked down the single beautiful shot of Noe and Vanitas plummeting to the streets of Paris below as they’re framed by the magnificent blue moon just for a good wallpaper. Everything I said about the color palette and sense of atmosphere comes back here in force; it’s this gorgeous menagerie of golden light twinkling from the city below, blending into the rolling fog and then the azure glow of the moon, all while our two leads plummet to their likely demise. 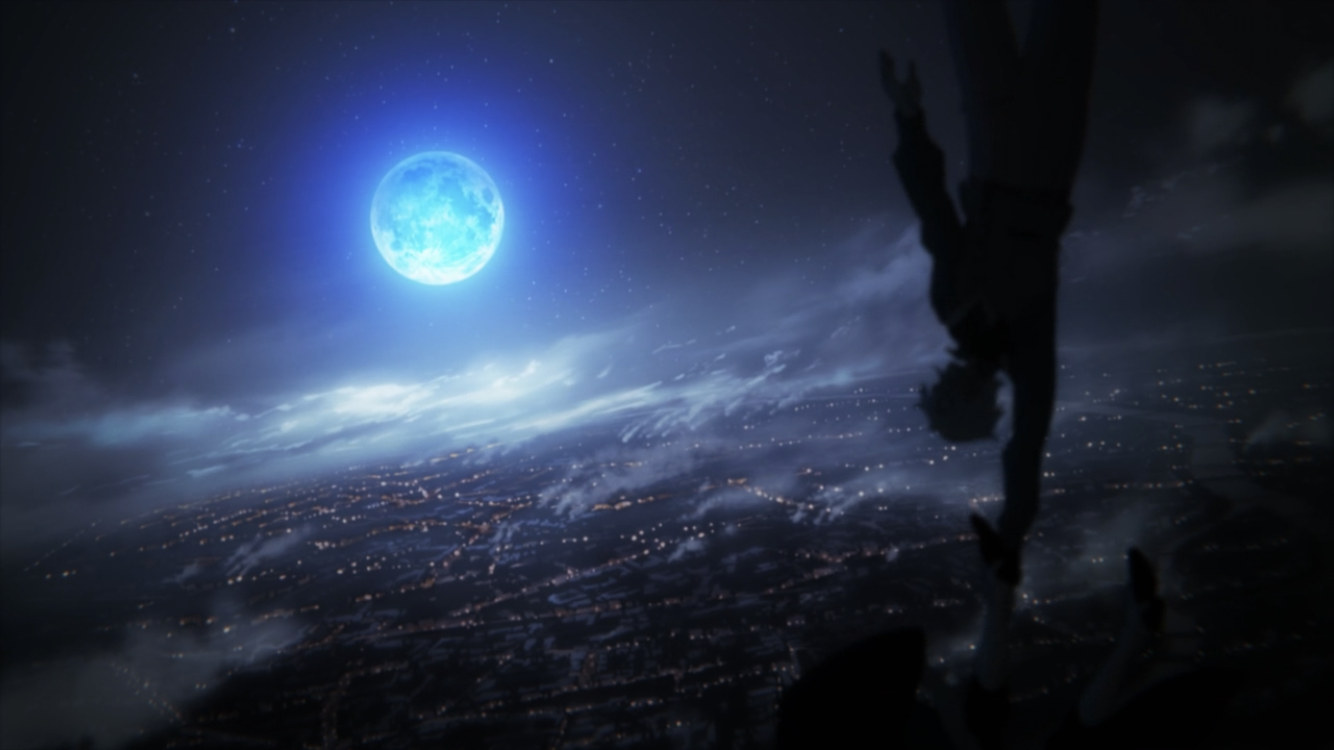 The central focus of the story appears to be Vanitas and Noe’s friendship; the series wastes no time establishing their banter. I mentioned the humor briefly, but it’s a casual balance between the seriousness of the two boys in pursuit of their goals, and Vanitas’ tendency to be overly dramatic. In a word, he’s extra.

If I had to take a stab, I wouldn’t do it with Vanitas’ chunky dagger; I thought the dramatic vampire/phantom thief types preferred rapiers or slender knifes. Whatever. If I had to take a guess, I would say that the series is going to follow something of a patient of the week format. As much as Vanitas likes brandishing his knife, he gets his kicks from helping people in the most melodramatic way possible.

Deciphering someone’s true name and freeing them seems like a strong basis for a character comedy and drama. At least it will be until they investigate further and can learn the secret of why vampires’ true names are being targeted. if the series can maintain the two leads’ chemistry, build on the personalities and backstories in interesting ways, and give us some solid fights, I’ll be satisfied. 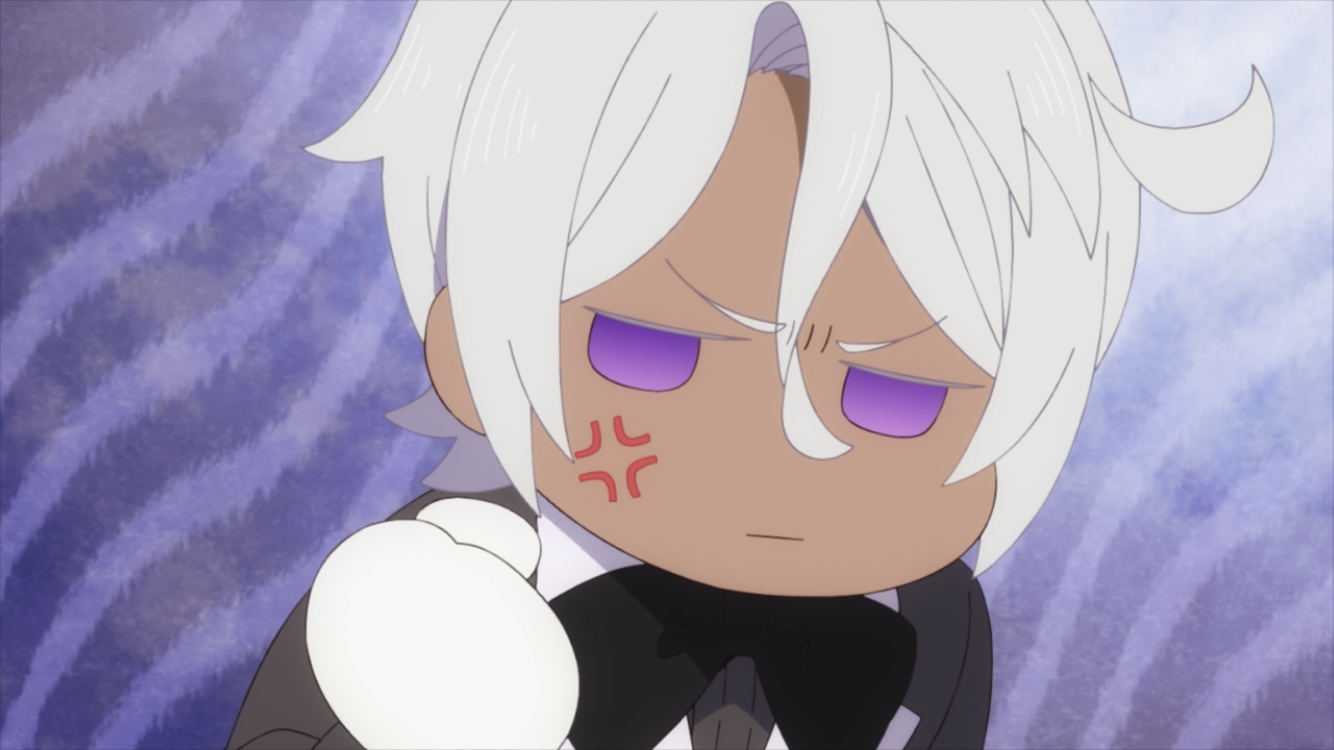 The Case Study of Vanitas doesn’t look like it’s going to change my life, but there are plenty of anime this summer that are already trying to do that, and succeeding. Of the particularly well-written variety, you’ll have to wait on that a bit longer, especially in the case of Beastars season two. I’m not too upset about how late it’s going to be, as Netflix jail prevented that from ever being timely.

It has thus far presented a fun, aesthetically pleasing ride, which is something of a rare commodity this summer. We have shockingly cute thrillers, isekai duds, and some compelling dramas, but a funny anime with a strong conceit for dramatic visuals? It strikes just far from the beaten path of seasonal anime to be worth your time.

The Case Study of Vanitas has distinguished itself by not doing too much to distinguish itself, though I look forward to seeing whether or not it can strike a balance between its dark subject matter and its comedy. With that said, it has earned an Entertaining Fantastic.

If you think The Case Study of Vanitas is still a better love story than Twilight, feel free to let me know by liking the essay, telling me in the comments below, following the Otaku Exhibition on WordPress, or over on Twitter @ExhibitionOtaku. Until next time, thanks for reading.